The general form of collecting semantics is:

except at the entry into our control-flow graph.

Example Program with One Variable

Because there is only one variable:

Sets of States at Each Program Point

Collecting semantics computes with sets of states at each program point

as a shorthand for

In the initial state the value of variable is arbitrary:

From here we can derive

to new value of

becomes a system of inequations

To find fixpoint, we compute the sequence 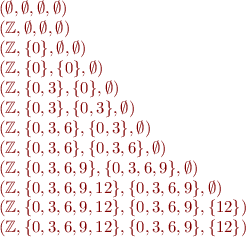 Thus, all subsequent values remain the same and

is the fixpoint of collecting semantics equations. In general we may need infinitely many iterations to converge.

Question: Suppose that we have a program that terminates for every possible initial state. Can we always find a finite constant

i.e. the sequence such as the one above is guaranteed to stabilize?

Example: Assume an arbitrary initial value and consider the loop. Compute a sequence of sets of states at the point after the increment statement in the loop, following the equations for collecting semantics.

What always works from omega continuity:

on a tuple above means taking union of each component separately, so