Formulas for Representing Sets and Relations

Let the state of programs be

In Hoare Logic Basics we defined meaning of Hoare triple

We also defined the meaning of wp and sp. We next look at these notions when

. Initial state has values of x,y equal to

etc. Previously we worked on such sets and relations. Today we work on actual formulas i.e. their syntax trees.

be formulas in our language

a command, following the syntax of our simple programming language.

We define Hoare triples on these syntactic entities by taking their interpretation as sets and relations. Specifically, given definitions in the Hoare Logic Basics, we define

Taking into account the definition of Hoare triple for sets

We similarly extend the notion of

to work on formulas and commands.

We use the same notation and infer from the context whether we are dealing with sets and relations or formulas and commands.

, we will compute formulas that define relations, following the definition of

we compute by formula

specifying the semantics of c_1, that is, formula

Denote the truth value of formula in two states by 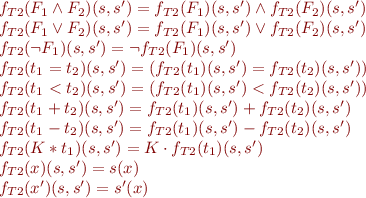 We can then write more precisely the condition for formula

. It should be formula

With such notion of

, we represent the validity of a Hoare triple with

as the validity of the formula:

We next give rules for computing

for each (loop-free) command