Hoare logic is a way of inserting annotations into code to make proofs about program behavior simpler. We first explain them using sets and relations.

Hoare Triple for Sets and Relations

(sets of states) and

denotes one quadrant in plane, whereas a weaker condition

This is simply Relation Image of a set. 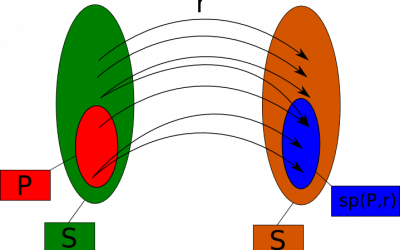 is the the smallest set

If we have a relation

and a set of errors

, we can check if program meets specification by checking:

In other words, we obtain an upper bound on the set of states

from which we do not reach error. We next introduce the notion of weakest precondition, which allows us to express

given as complement of error states

Note that this is in general not the same as

when then relation is non-deterministic or partial. 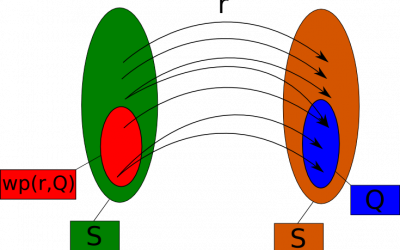 is the largest set

Some More Laws on Preconditions and Postconditions

We next list several more lemmas on properties of wp, sp, and Hoare triples.

Postcondition of inverse versus wp

If instead of good states we look at the completement set of “error states”, then

backwards. In other words, we have the following:

The following three conditions are equivalent:

We write this as the following inference rule:

Proof is by transitivity.

By Expanding Paths condition above, we then have:

This is the rule for non-deterministic loops.