Relational Semantics of a Simple Language

We will next give meaning (semantics) for our Simple Programming Language using relations between initial and final state of each command. We illustrate the use of this semantics by showing certain very simple program equivalence properties.

When we write “x” we mean the variable named x viewed as a syntactic object (string or a node in syntax tree). We sometimes omit quotes.

Examples of Semantics for Some Programs

In such a semantics, if the state of the program is given by one integer variable x, then the meaning of this 'increment program':

A pair of integers

is in relation, written

The meaning is, in general, an arbitrary relation. Therefore:

Our programs can have any finite number of integer variables. Let

denote the set of variable names such as 'x' in the example above. The state of our program is a function

mapping variable names to their values, and the set of states

is the set of all such functions. We assume that the range of variables is

(the set of integers), but most of what we say will be independent on whether the variables are integers or have some other type.

In the above increment program,

and a state is of the form

(recall that we represent each function

). So the increment function is given by a relation, call it

, that takes the state

and maps it to state

What happens when we have more than one variable? Let

and consider this program:

The meaning of this program is given by relation

Renaming variables so the initial value of variable “x” is denoted

the formula semantics of this command.

When we have multiple variables, we can give semantics to assignment statements using function update notation. Regardless of the number of variables in

, the relational semantics of x=y+y; is

denote the set of all commands (programs). Our goal is to define semantic function for commands, denoted

(relation of the command), which maps each command

into its relational semantics

To define meaning of statements such as x=y+y; we need a way to evaluate a term such as y+y in a given state. We introduce function

(function of the term), which maps a term into a function from states to values:

Given some definition of

, the meaning of the assignment statement is simply

We next define meaning of terms, whose syntax we defined earlier.

The recursive definition corresponds to a program you would write in e.g. Scala to compute the value of an expression in a given state when writing an interpreter.

Based on that context-free grammar, we can define recursively the terms semantic : 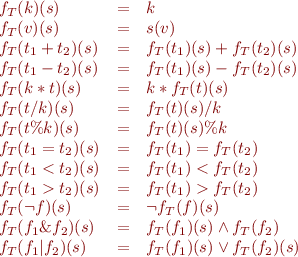 Consider the task of a programmer or a compiler who wishes to reorder two assignment statements, converting

. Under what conditions will these two program fragments have the same meaning?

To answer that question, we just have to derive these two expressions :

Thus, if y is free in

and x is free in

, these two fragments will have the same meaning.

Assume statement is a useful declarative statement, which we will use to define the meaning of several remaining commands. The meaning of assume is simply is the diagonal relation, which produces no resulting states if the given expression is false, and does nothing if the expression is true:

Non-deterministic choice is another useful declarative statement, which non-deterministically chooses to execute one of the two statements. We use it to express other statements, as well as to model branching with conditions that we cannot express in the language. Its meaning is simply union of relations:

We will define the semantics of

as the semantics of

Note that we are using non-deterministic choice, but exactly one of the two statements in the non-determinitic choice will succeed.

Exercise: expanding the definition of conditionals

We can also express this semantics directly as:

We define semantics of

as the semantics of

Why does this definition make sense? It will be union of relations of the form:

for all n. But if the value of n is wrong the result will be empty relation:

Therefore, the result is equal to the correct number of execution times.

Summary of Simplifying the Language

we can have language

Applying it to a multiplication example, we obtain

Havoc statement is another useful declarative statement. It changes a given variable entirely arbitrarily: there will be one possible state for each possible value of integer variable.

We can prove that the following equality holds under certain conditions:

In other words, assigning a variable is the same as changing it arbitrarily and then assuming that it has the right value. Under what condition does this equality hold?

Summary of Correspondence between Programs and Relations

Control-Flow Graphs, While Theorem: One Loop is Enough

Sum of all matrix elements as control-flow graph and as one loop.

We represent it as

We compute the meaning of

We then wish to compute the transitive closure

We claim that for every

is given by formula

We can prove this claim by induction. The union of these relations is then given by

From there we can derive the meaning of

which when composed with assume(

which is equivalent to

This is the semantics of the above code.

Nondeterministic programs can be used to specify other programs

is relation representing program and

This allows us to prove that programs satisfy their contracts, expressed using preconditions and postconditions:

What is the relation for contract with