except at the entry into our control-flow graph, where it approximates the set of initial states at the entry point.

In Collecting Semantics for Example Program we had representation for all possible sets of states:

Here we have representation of only certain states, namely intervals:

We try to define

to be as small as possible while satisfying this condition.

By property of Galois Connection, the condition

as small as possible, we let the equality hold, defining

For correctness, the condition from Abstract Interpretation Recipe is that for each

to be as small as possible so that this condition holds

By property of Galois Connection, the condition

to be as small as possible (to obtain correct result), we let equality hold:

, we can compute the value of

an integer constant and

Note that for every command given by relation

Abstract Semantic Function for the Program

In Collecting Semantics for Example Program we had 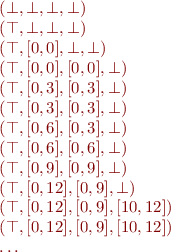 Note the approximation (especially in the last step) compared to Collecting Semantics for Example Program.

We are talking about overapproximating analysis.

When we talk about the transition relation, then we need a big

, which maps states including program counter. We define it by

The soundness condition is then:

is defined pointwise for each component of the tuple. By definition of

, this reduces to pointwise conditions.

For example, we need to ensure that

To show this, we can start from left hand side and push

outside, obtaining larger and larger sets.

Consider an analysis that has two integer variables, for which we track intervals, and one boolean variable, whose value we track exactly.

Give the type of

is a linear combination of integer variables, for example,

Consider an interval analysis that maps each variable to its value.

Describe an algorithm that will, given a syntax tree of

after the assignment statement.

For a program whose state is one integer variable and whose abstraction is an interval, derive general transfer functions

for the following statements

is an arbitrary compile-time constant known in the program:

Consider a program with two integer variables, x,y. Consider analysis that stores one interval for each variable.

Draw the control-flow graph for the following program.

Run abstract interpretation that maintains an interval for

at each program point, until you reach a fixpoint.

What are the fixpoint values at program points