There are two ways to create threads in Java: subclassing the Thread class or using the Runnable interface:

The Thread is an encapsulation of the thread construction and gives a way of communicating with the thread as an entity. The Thread class is used to spawn the thread and can be used to start or pause the thread.

To spawn a new thread using the Thread class:

The Runnable interface specifies only one method, which takes no parameters:

This method effectively replaces the run() method of the Thread class and frees the programmer from the constraints of having to subclass Thread.

A Thread object must still be made, as its start() method is still needed. To spawn a thread using the Runnable interface:

Synchronized statement: When this statement is used in front of a method declaration, it prevents multiple threads from simultaneously executing the method. If one thread is executing the method, then all other threads are “locked” out and wait for the first thread to finish before they get their turn.

A thread may read the value of a variable or change its value. If two or more concurrent threads act on a shared variable, there is a possibility that the actions on the variable will produce timing-dependent results. This dependence on timing is inherent in concurrent programming, producing one of the few places in the language where the result of executing a program is not determined solely by this specification.

Series of examples with concurrency

Chord is a static race detection tool for Java to find serious and previously unknown concurrency bugs in programs.

Data race occurs when same location is accessed simultaneously without common lock held by more than one thread where at least one thread is writing. 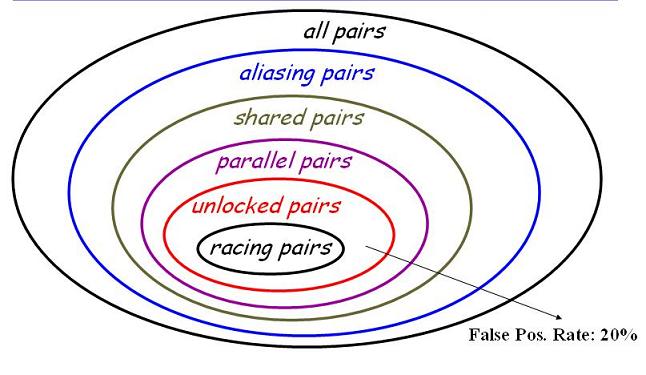 Field f is race-free if: 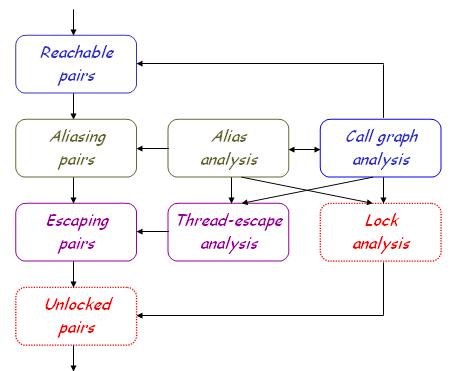 Goldilocks is a lockset-based algorithm for precisely computing the happens-before relation and detecting data-races at runtime(dynamic race detection).