Currently the algorithm will generate linear sized and linear time code(?), whereas the above example generates logarithmic time and linear size code

. Similar results hold for other constructs So, to handle negations, one needs only to handle strict inequalities.

To handle the strict inequality

, we can add a slack

Then we maximize over

. If the maximum is 0, then we know that strict inequality cannot hold, else we just discard the value. Multiple non-strict inequalities can be handled this way??

Alternatively, we use the notion of Not Necessarily Closed Polyhedra, for which the standard polyhedral operations can be implemented, with some modifications. Refer “Not necessarily closed polyhedra and Double Description method” not_necessarily_closed_polyhedra_and_double_description.pdf

It is assumed that the input formula is a quantifier free formula of the form:

Quantifiers, if any, as well as other operations such as

have been elminated during preprocessing

It is clear that every formula containing only linear constraints with conjunctions and disjunctions can be put into this form, if strict inequalities are included.

The elements of matrix A are all known rational values while those of b are unknown rational parameters which will become available at runtime. The aim is to generate code which uses the parameters and efficiently finds one satisfying assignment of values.

We shall refer to the parameters as “input variables” and to the variables whose values are to be found as “output variables”.

?example) etc Finding a solution to a problem is NP-hard, even without parameters.

With parameters, the problem is decidable, even if all the parameters are unknown. We consider the case where the values in A are known, while those of b are parameters. Even if none of the parameters of A were known, it is possible to generate the code for solving this problem using Gaussian Elimination for equalities and Fourier-Motzkin elimination for inequalities. The problem is solvable and a polynomial sized code (wrt formula size), which executes in polynomial time, can be generated for Gaussian elimination, while doubly-exponential code(wrt formula size), which executes in

time, can be generated in Fourier-Motzkin elimination.

: use a better example) Expected kind of input for this program is (check)

or, if arbitrary precision is required,

and the expected output is a code giving a value for x satisfying these conditions. Clearly, many solutions are possible. The code will output only one. Here,

are both valid solutions

and the expected output is a code giving a value for x satisfying these conditions. Clearly, many solutions are possible. The code is expected to output only one. Here,

is a valid solution

Thus there are 2 parts to the problem:

The solution to this problem can be achieved by quantifier elimination. (e.g. Ferrante-Rackoff elimination or the work described here: Quantifier Elimination for Real Arithmetic) Quantifier elimination is in fact projection, in our setting. However, we can use the geometric structure of the problem to achieve runtime efficiency and better worst-case bounds(???) on the elimination. Further, we wish to not only eliminate quantifiers, but to also give a witness function so that the values of the output function can be recovered. In this case, the elimination of quantifiers while also simultaneously storing the witness functions gives no advantage(?? is worse than) over calculating and minimizing the representation of the formula, and then applying the geometric projection operation on the resulting representation.

Polyhedra and unions of polyhedra

Polyhedra are defined as the set of solutions of the equation

We consider 2 ways to represent Polyhedra.

is redundant wrt the set

The following heuristics can be applied to quickly remove redundancies:

==Find if a hyperplane intersects the interior of a polyhedron== (determining points of contact is not required) : Solve a linear program

A standard technique, used by many polyhedral manipulation libraries, is to store both H and V representations, i.e. a double description of polyhedra.

For polyhedral manipulations, we may use a standard library such as PPL (Parma Polyhedra Library) PPL A list of available tools is present at Wikipedia

we consider the polyhedron formed by taking all the variables (including the paramteres on the RHS) as a system.i.e.

Thus, we effectively treat this as a problem in a higher dimensional space

) We use the notion of cells to simplify formulae

Redundancy removal is also an important operation. The input given by the user is in the form of an intersection of Halfspaces, which may be redundant.

We partition the region into a union of a set

of convex polyhedra, each of which is called a “cell”.

A cell is defined as any, bounded or unbounded, convex polyhedron.

A cell decomposition is a set of cells which satisfies:

This is in slight contrast to the definition of cell complex found elsewhere in the literature, for example, Fukuda's Polyhedral FAQ, where each face of each cell is also included in the cell complex. We drop this condition.

We will call a cell decomposition “optimal” if no two cells in the decomposition are such that their union is a convex polyhedron. The optimal configuration is unique if the entire region is convex, otherwise many optimal decompositions can exist.

As Cell Decomposition is not unique, it can be achieved in different ways, we explain with respect to the 2 polyhedron case:

possibilities for regions (i.e. taking each constraint and its negation).
Some will be rules out as unsatisfiable straightaway (Use an LP solver)
For the remaining regions, use a SAT solver to find out if it is implied by the constraints (or convert to DNF and check if it is implied)
Output the those regions which are implied by the formula as the cells.

The following algorithm has probably the same worst case complexity, but practical complexity

Let the constraints of

intersects the interior of

as the cell decomposition

should be taken to mean the closure of the negation, i.e.

When the algorithm terminates, no constraint

intersects the interior of any polyhedron in

. By construction, no 2 polyhedra in

intersect. This operation will run in time exponential in the number of constraints in

Taken as formulae, this step is equivalent to :

where both the disjuncts

are non-empty. This non-emptiness is what is checked by the LP solver

The algorithm to check if a polyhedron intersects solves a linear program, thus using the geometry of

, which should(?) make this algorithm more powerful than blind manipulation of the constraints. 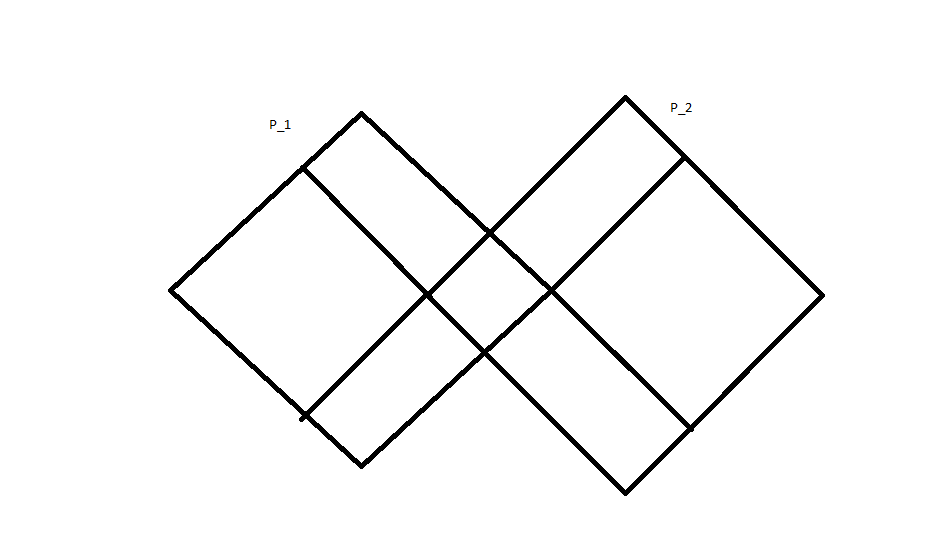 However, this requires calculating the vertices of the polyhedron, which may be exponentially more than the number of constraints.

For example, consider the intersection of 2 polyhedra,

is a vertex of the intersection of

. The second one is not a polyhedron, but it can be represented as the part of

. Taking the representation of

as the H representation, the decomposition of

into cells can be found. 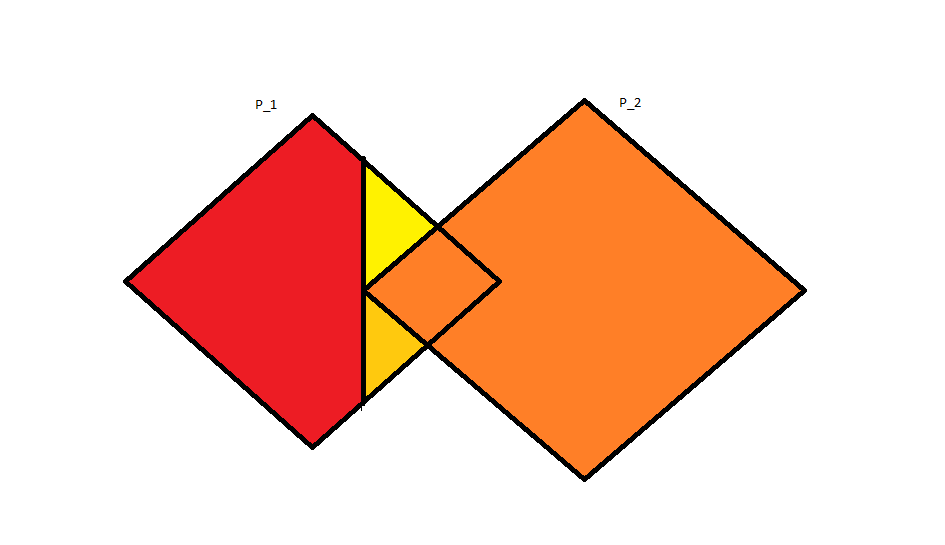 Arguably, the best decomposition is this case is the following: 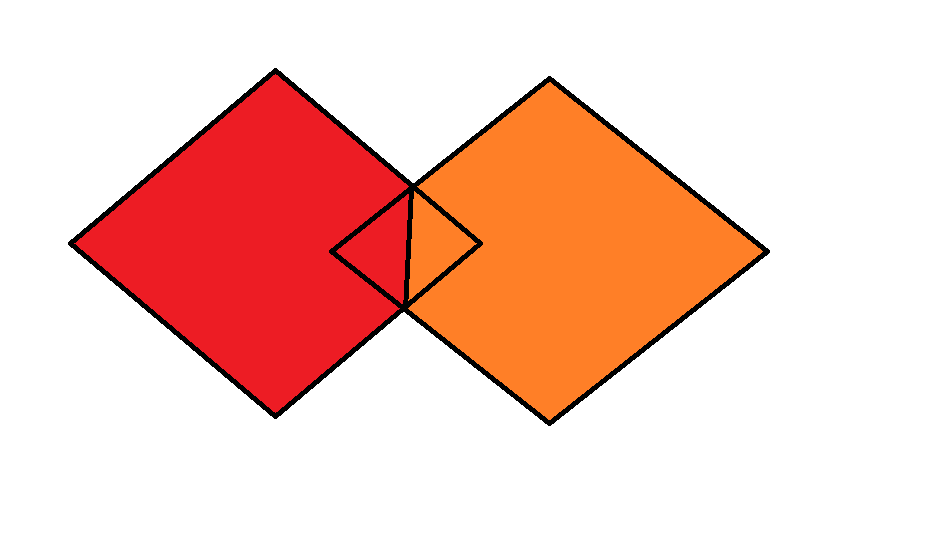 The algorithm simply generalizes the above procedure to conjunctions and disjunctions of polyhedra, and uses the tree structure to do so

It is instructive to consider some important special cases of the algorithm are when the constraints consist of only conjunctions, only disjunctions, or disjunctive or conjunctive normal form.

Here each conjunction will be represented as a polyhedron, the aim is to find a minimal representation for the union of these polyhedra which is represented by the disjunctive normal form. We apply the cell decomposition method above to get a representation as a union of disjoint cells. Then we use each cell to generate the code for its polyhedra. After this, the code can simply be concatenated to give the final code eg.

We can apply heuristics such as:

The Main algorithm is a slight generalization of the above algorithms

Pseudocode for the Main Algorithm

Output: Code for a function which takes

is satisfied
Algorithm: The input formula is assumed to be in the above normal form. The Algorithm proceeds in three steps.

The formula is represented as a list of disjoint polyhedra, i.e. as a disjunctive normal form. However, our representation is better because it the polyhedra are disjoint We build the projection onto the set

by merging the projections of each cell.

Notes about the implementation

of convex sets with

is nonempty, we consider every set of

vertices is nonempty, then all the sets must intersect.

TODO: Traditional Proof of Helly's theorem is an existence proof, i.e. it proves that a point exists, but does not describe how to find the point. Find a constructive proof and see if it can be efficiently used.

Proof for a property of Convex Hull Extreme Point Algorithm

Consider the convex hull of a set

is called an extreme point if for any

belong to some polyhedra in

so that p belongs to some polyhedra in

and is also an extreme point of that polyhedron.

Note: The extreme points of the convex hull are its vertices, if it is topologically closed.

The above result can help us quickly check for the existence of solutions. We can calculate the convex hull of the set of constraints and return any extremal point.