We build first-order logic formulas by starting from atomic formulas (defined below) and applying propositional operators and quantifiers:

For a given value of variables, each formula evaluates to true or false. The rules for propositional operators are exactly as in propositional logic. Quantifiers can be seen as a way of generalizing conjunction and disjunction. First-order variables range over some domain

. In the special case of finite domain

which corresponds to the intuitive definition of terms “for all” and “there exists”. Note, however, that

can be infinite in general (for example: the set of integers or reals).

Predicates represent relations, for example, we can represent

as a binary relation.

. We build them starting from variables and constants and applying function symbols:

Example of constants are numerals for natural numbers, such as

. Examples of function symbols are operations such as

From above we see that the set of formulas depends on the set of predicate and function symbols. This set is is called vocabulary or language.

In general all quantifiers range over some universal domain

. To restrict them to subsets of

, we can use bounded quantifiers:

is some binary relation written in infix form, such as

To evaluate first-order logic formulas we need to know:

. The formula has one predicate symbol

. Assume that the domain

is the set of integers and consider two possible interpretations:

in each of these two interpretations.

Formula is valid if and only if it evaluates to true for all domains, values of its variables and interpretations of predicate and function symbols.

Formula is satisfiable if and only if it evaluates to true for some domains, values of its variables, interpretation of predicate and function symbols.

Formula is unsatisfiable if and only if it is false for all domains, values of its variables and interpretations of predicate and function symbols.

Answers to some important algorithmic questions (not immediate):

Note that because finite domains are a special case of possible domains, we have the following:

Answers to some important algorithmic questions about finite satisfiability:

If we take a propositional tautology and replace equal propositional variables with equal atomic formulas, we obtain a valid formula. Such formula is called an instance of a tautology.

But there are many other valid formulas. Such formulas are valid laws of thinking that we often use in mathematics (explicitly, or implicitly without mentioning them). 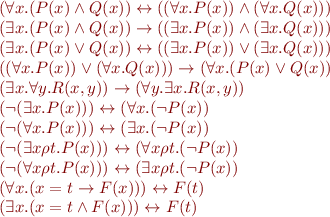