Propositional logic is the core part of most logical formalisms (such as first-order and higher-order logic). It also describes well digital circuits that are the basis of most modern computing devices.

Propositional formulas are expressions built from

specifies a binary function from values of

, a propositional formula such as

specifies a function from the values of

We specify a binary logical operation by a truth table: for each combination of arguments we indicate the result of the operation. For binary operation, the rows indicate the first argument, the columns indicate the second argument.

Check validity of these implications:

Logical Eqivalence ('if and only if')

If we know values of variables in the formula, we can compute its value.

for all values of its parameters. Let us draw formula as a tree. We introduce a column for each tree node. We obtain the value of a tree node by looking at the value of its children and applying the truth table for the operation in the node. The root gives the truth value of the formula.

Formula is valid if it evaluates to true for all values of its variables (all columns for formula say true).

Formula is satisfiable if it evaluates to true for some values of its variables (true appears in at least one column).

Formula is unsatisfiable if it evaluates to false for all values of its variables (all columns for formula say false).

SAT problem: given a propositional formula

SAT is a well-known NP-complete problem.

Valid propositional formula is called propositional tautology, or tautology for short. Tautologies are basic principles of logical reasoning. They are true regardless of how complex the intended meaning of propositions is, as long as we are sure that each proposition evaluates to true or false. 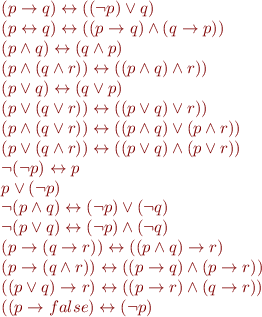