is a set of relation symbols

, each of which comes with arity

denotes countably infinite set of first-order variables, which is independent of the language.

When in doubt, use parentheses.

Often we use infix notation for relation and function symbols. In the example above, if we write

in infix notation, the formula becomes

Notation: when we write

are identical formulas (with identical syntax trees). For example,

, but it is not the case that

In Isabelle theorem prover we use this

Rendering and input in math notation is also possible using ProofGeneral. Note: the equality symbol (even if used on 'bool' types) binds more strongly than propositional operators, unlike the usual equivalence.

Type of first-order formulas is bool.

Usually we treat formulas as syntax trees and not strings.

denotes the set of free variables in the given propositional formula and can be defined recursively as follows: 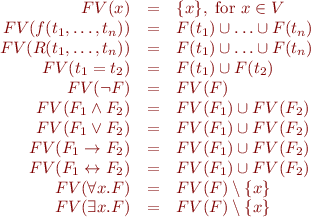