The last two assumptions are made for simplicity, since parameter passing can be simulated using global variables and assignments. For example, a function called p with a parameter x, p(x), can be represented as a function without parameters, p'(), by introducing a global variable x.

These are stated as regular expressions so that it is easier to check whether the program satisfies these constraints.

Semantics for language with procedure calls

In this approach, we treat a procedure call as one step. This can be thought of like a step-over move in a debugger.

be the set of program states and

be the set of vertices in the control flow graph. Then we can describe a point in the program as: 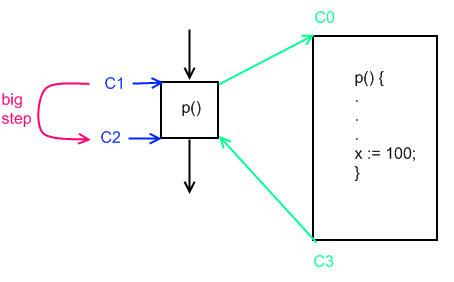 is a procedure which can described by the relation

Then we can formally define the semantics of a big step (

Using small step semantics, we treat the procedure call as a sequence of small steps corresponding to each statement in the procedure. This is like the step-into move in a debugger. To accomplish this, we need a stack to keep track of the return point after we come back from a procedure. Therefore a program point can now be described as:

is the set of sequences of vertices in the control flow graph.

) can be described as:

After the first step at the point where the procedure is entered,

is pushed on the stack so that we know where to return to after the procedure is done. The last step is the point where we return from the procedure, so we pop

from the stack and that is the point in the control flow graph where we return to.

Here we have assumed the procedure has no local variables, although to support them, we'd just need to add another set to the program description:

is the set of mappings of local variables of a procedure to their values. Furthermore, on each procedure call, the program pushes

on the stack along with the program point. Everything would be popped off from

when the procedure returns control to the callee.

One instance where small step semantics would be necessary is in concurrency, so that we can take into account interleaving.

Assume the program is in an arbitrary state and model the procedure call as a havoc statement.

In previous lectures, we have seen how to compute

is a lattice and

By treating a procedure call as a havoc, we would have

which would mean that anything can happen, and we would lose all precision.

When a procedure call is encountered, it is replaced by the statements of the procedure (so the procedure code is inlined with the code of the callee). A problem arises when the procedure being inlined is recursive. One approach to dealing with this situation is to inline the recursive procedure a few times, and then treat the recursive call as a havoc statement (as described above). However, even if this is done, inlining increases the size of the code exponentially.

During the verification of a program with procedures, when a procedure call is encountered, the procedure's contract is evaluated. We assume that the user has supplied the procedure contracts, although it may also be possible to infer contracts (especially the ensures clause).

In our example, to satisfy the second property of the program, we introduce a boolean variable

The procedure contract for p2() then looks like this:

In order to define procedure contracts for readContent() and p1() to ensure that this property is satisfied, we introduce an object called FileState which has a typestate. In typestate systems, the type of an object is allowed to change during its lifetime in the computation. In the paper Generalized typestate checking for data structure consistency, it says that “unlike standard type systems, typestate systems can enforce safety properties that depend on changing object states”.

Using this notion, we can write the procedure contracts for the two methods as follows:

Assume we have a program with a finite number of program states. Recall that we can write a push down automata (PDA),

, which will accept a language,

, that corresponds to all sequences of operations in the program (SAV07 Lecture 19). Then we can use the PDA to check whether the properties of the program (stated as regular expressions) hold. We do this by constructing a finite state automaton (FSA),

, which accepts the language,

PDAs and context-free grammars (CFG) are equivalent. Therefore, as an example, we construct the CFG corresponding to the example program above:

is the set of symbols on the stack

is the set of program states

Now to check whether property 2 holds, we have to verify whether

Checking whether one language is a subset of another

is true is equivalent to showing:

be the set of states of

be the set of states of A. Then

is the language accepted by a new PDA,

, whose set of states is

be the CFG equivalent to

. Therefore the problem is now to check whether

bottom up (starting from a terminal and following the non-terminals which are used to derive it). If the non-terminal representing the start symbol is reachable in at least one of the derivations, then

and the property that

represents does not hold.

A formal analysis if this “reachability” problem in pushdown automata is discussed in the paper Reachability Analysis of Pushdown Automata: Application to Model Checking. A summary of the sections of the paper we covered in class are in the next section.

Convergence of automata for reachable configurations

One of the main results of this paper is an algorithm which, given a set of states

, computes the set of all predecessors of

are regular, i.e. they can be represented using a finite state automaton.

In the paper, a pushdown system is defined as a triplet

is a finite set of control locations

is a finite stack alphabet

is a set of transition rules

Note: an input alphabet is not defined, since here we are only interested in the behavior of the PDS, not the specific language it accepts.

be a PDS with

. A multi-automaton (MA for short) for

is a finite set of states

is a set of transitions

is a set of initial states

is a set of final states

is defined as the smallest relation which satisfies the following properties

accepts or recognizes a configuration

. The set of configurations recognized by

. As stated before, a set of configurations is regular if it recognized by some MA.

Section 2.2 of the paper explains how, given a regular set of configurations

recognized by an MA

, we can construct another MA

(refer to paper for details).

So the idea in the end is to make

include those undesirable (error) states, and then check whether

includes the starting state configurations (in other words, whether any of the error states are reachable from the start state).