Lecture 7: Formulas as a unifying domain for static analysis

Analysis domain based on formulas and main operations:

. We then should find a way to “put back” in

what we obtain from

. The figure below should help understanding the transformations.

so we need the normalization function 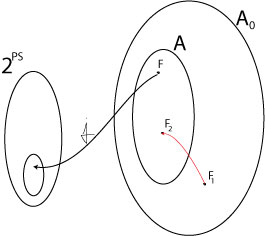 are program points (between statements) and

are edges labelled with program commands.

Control Flow Analysis: Flow chart representation of a program. It is defined by some set of node (

As we are analyzing the program and we don't have any initial knowledge about the context we are starting in, we make our first assumption as general as possible.

Basic philosophy of the analysis: compute precise results whenever possible, then apply

to fit it into

, except for initial program point

. This can be different if we know something about the initial program state. For instance, when analyzing Java programs, we could use the fact that primitive data types are initialized to default values.

to compute the impact of all incoming edges

For example, if we have a state

respectively, we would have the following update rule for

When we do an analysis we must consider two properties: Correctness (soundness) and Termination

Correctness (soundness): if for each program point

, then the facts are true in all program executions and they correspond to loop invariant(s). For more information see correctness of formula propagation.

(If we stopped the analysis before this happens, then the result is not correct, it does not take into account all executions).

Note: To prove correctness for the guarded command [ ] (non-deterministic choice) we can choose any path we like, the only aspect that matters is fairness (in the choice).

. That is, no new states are generated by strongest postcondition (we have reached a fix point - formula not trivial).

Note: If you end up with a situation where

, then the analysis gives no useful information about state

. In this case, you may want to refine

(and hence also change the function

). Sometimes, this can be done automatically.

(an example of Independent Attribute Analysis)

Definition of the domain

We have some predicates

and a set of formulas

. Let us observe that

(the height of a tree representing a formula), and

(the number of possible formulas).

a normalization function (look at the General Setup at the top of the page for more details). We will look at two possible ways to construct it for our example.

We want to compute

. We use the following construction:

To understand why this is indeed a normalization, notice that even though

, we're computing a conjunction on predicates which are implied by the postconditions and therefore, this conjunction is also

(Alternatively, we can use weakest preconditions and write

is still a normalization function. We have

is the strongest possible. If we are trying to find strongest precondition, then we would compute

The intuition here is really to take all possible formulas in the simplified language which are implied by the formula to be normalized. To avoid weaker formulas, we take conjunction.

Note We may want to add the predicate 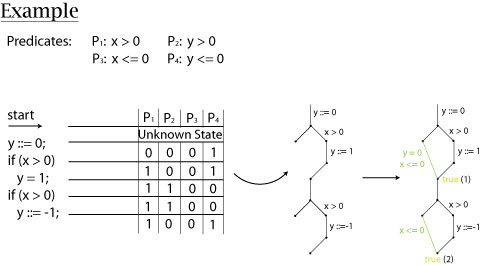 Looking at the program, one should be able to state that at its end,

. However, the conclusion reached at the end of the analysis is

, in other words, it tells us “the predicate

is always true at the end of the program”. In yet other words, this tells us nothing interesting. Why the difference?

will have no effect on the final result. The reason is that the assignment is “canceled out” by another one which occurs for the same condition,

doesn't change in between.

The fact that we only used conjunctions is our analysis makes it path-insensitive. Intuitively, since we're only taking conjunctions, our normalization is too conservative and we will not be able to retain properties associated to certain paths. Path-sensitivity is often used as a measure of the precision of an analysis.

(an example of Dependent Attribute Analysis)

As we just saw, our analysis domain turned out to be too restrictive. We may want to use a more extended one. Let's define a new set of formulas:

The use of disjunctions allows us to write predicates about attributes for some particular paths. For this reason, this is called relational (or dependent) attribute analysis.

If we go back to our previous example, we could end up with a predicate at the final point which would look (at least partially) somehow like:

were taken and the second the ones when they weren't. From there we'd find that

always holds. (Note that this is informal and was not done in class.)

While this construction is valid mathematically speaking and it allows us to express more properties on programs, we have a problem with the exponential growth of the size of

, and the height of the formulas

. Consequently, we need some optimizations. For instance, we could do simplifications such as:

For mode details, see the papers.

Note: There is a tradeoff between precision and efficiency.

(section not covered in class)

All we have seen so far was about simple values. In complex programs we have runtime effects, e.g. pointer.

In fact, it can happen that two variables with different names (aliases) represent the same object (in memory). Take the following example:

are not pointing on the same memory address (so, in the code, there is no such statement

). The semantic that we have used since now doesn't allow to correctly handle those runtime effects.

Allocation-site based analyses and logical representation of their abstract domains.