We can view analysis and verification as two stage process

In general, the system of equations (for a program expressed as one loop) is an approximation of the condition

is the set of reachable states and

the code of the program.

We have seen earlier

Today we look at another constraint based analysis, which deals with non-numeric properties and is based on set constraints.

Set constraints can be naturally used to express

We can define the subset constraints between expressions denoting sets of terms using the following grammar :

is a terminal (it can be a variable or function symbol),

is an application function and

is the projection of th

) as it is not monotonic, so its use is restricted if we want to ensure existence of solutions.

is the Herbrand univers, or “set of all ground terms”, or also called the “term model”. As we already saw, it's the set of all possibly constructed trees using language

Given that, if the meaning of

), then we can estimate the meaning of our language as following :

can be viewed as a procedure call on which we apply possible parameters.

An important property we would like to have in this semantic is a very intuitive one :

This property is in fact not conserved as we can easily see using a very simple counter-example :

The correct interpretation of this property is :

A variable is said to ba alive when it's value will be reused later in the program.

in this example, only variables x and y are alive.

In order to compute the set of live variable, let's take the same example as before to use it to deduce the update rule. We can see our program as the following tree : 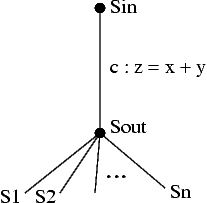 as they are used in

as it's the newly defined variable in

. Here we do not have a problem with the monotonicity of the \ operator as

is not a variable.

Example of the problem

is a part of the program

For the case of application, the question is : Can

From this we can deduce, as we defined previously, the following contraints :

Which leads to the following solutions :

Which shows that the variable

can described our test expression.

Now that we know how to convert the \lambda calculus into set constraints, we need to be able to express

into set constraints too as it is not part of our gramar.

The general form of the conditional constraints is the following :

Which has the correct meaning as we have :