Let us recall some basics of classical mechanics. What makes a particle, such as an atom, a comet or a star, move through space? First, the particle moves through space as a consequence of having some initial velocity compared to other particles. Second, the particle changes its velocity as a result of external forces. These forces are in direct correlation with the proximity of other particles. For example, Earth moves through space with some initial velocity, which is constantly being changed due to the gravitational force between the Earth and the Sun.

Before we study the Barnes-Hut algorithm for the N-body simulation problem, we will focus on a simpler algorithm – the direct sum N-body algorithm. The direct sum algorithm consists of multiple iterations, each of which performs the following steps for each particle:

The particle position is updated according to its current velocity (`delta` is a short time period).

The net force on the particle is computed by adding the individual forces from all the other particles.

The particle velocity is updated according to the net force on that particle.

This is shown in the following figure:

For each particle, the net force is computed by summing the components of individual forces from all other particles, as shown in the following figure: 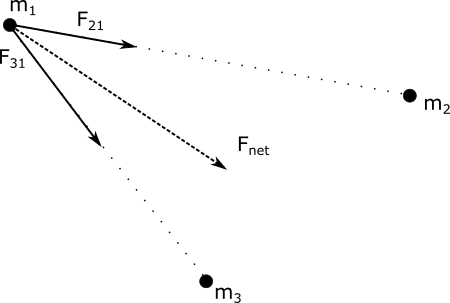 The Barnes-Hut algorithm is an optimization of the direct sum N-body algorithm, and is based on the following observation:

If a cluster of bodies is sufficiently distant from a body A, the net force on A from that cluster can be approximated with one big body with the mass of all the bodies in the cluster, positioned at the center of mass of the cluster.

This is illustrated in the following figure: 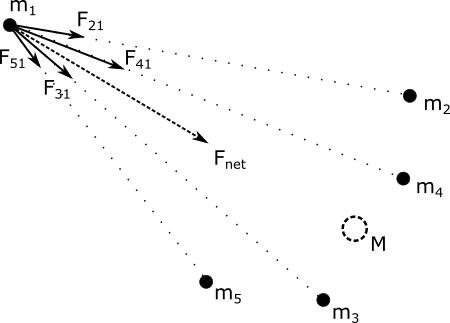 To take advantage of this observation, the Barnes-Hut algorithm relies on a quadtree – a data structure that divides the space into cells, and answers queries such as 'What is the total mass and the center of mass of all the particles in this cell?'. The following figure shows an example of a quadtree for 6 bodies: 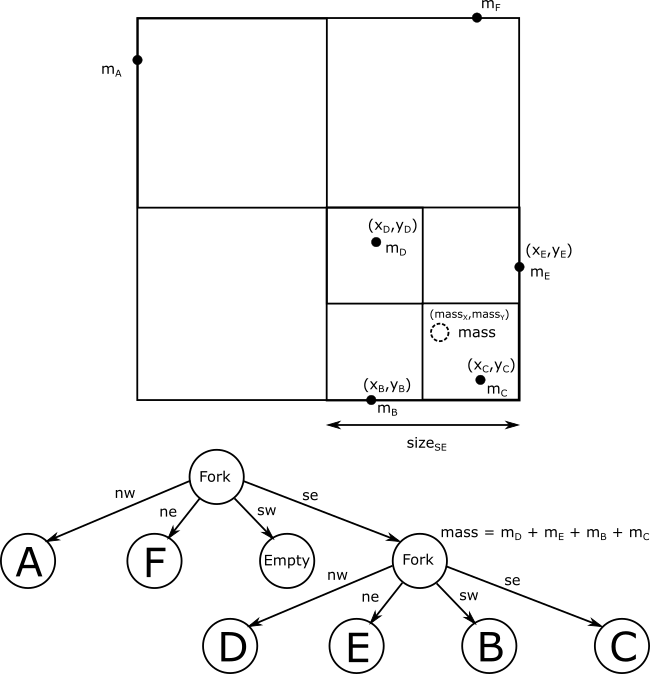 An iteration of the Barnes-Hut algorithm is composed of the following steps:

It turns out that, for most spatial distribution of bodies, the expected number of cells that contribute to the net force on a body is `log n`, so the overall complexity of the Barnes-Hut algorithm is `O(n log n)`.

Now that we covered all the necessary theory, let's finally dig into the implementation! You will implement:

Since this assignment consists of multiple components, we will follow the principles of test-driven development and test each component separately, before moving on to the next component. That way, if anything goes wrong, we will more precisely know where the error is. It is always better to detect errors sooner, rather than later.

We will start by implementing the necessary data structures: the quadtree, the body data-type and the sector matrix. You will find the stubs in the `package.scala` file of the `barneshut` package.

In this part of the assignment, we implement the quadtree data structure, denoted with the abstract data-type `Quad`. Every `Quad` represents a square cell of space, and can be one of the following node types:

The definition of `Quad` is as follows:

Note that we consider the top left corner to be at coordinate (0, 0). We also consider the x axis to grow to the right and the y axis to the bottom. 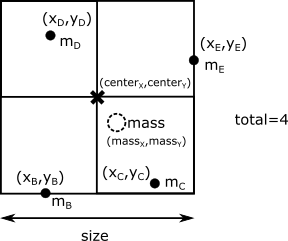 The method `insert` creates a new quadtree which additionally contains the body `b`, and covers the same area in space as the original quadtree. Quadtree is an immutable data structure – `insert` does not modify the existing `Quad` object. Note that `Body` has the following signature:

In this part of the exercise, you only need to know about body's position `x` and `y`.

The center and the size of the `Empty` quadtree are specified in its constructor. The `Empty` tree does not contain any bodies, so we specify that its center of mass is equal to its center.

Next, let's implement the `Fork` quadtree:

This node is specified by four child quadtrees `nw`, `ne`, `sw` and `se`, in the northwest, northeast, southwest and southeast quadrant, respectively. The constructor assumes that the children nodes that represent four adjacent cells of the same size and adjacent to each other, as in the earlier figure. The center of the `Fork` quadtree is then specified by, say, the lower right corner of the quadtree `nw`. If the `Fork` quadtree is empty, the center of mass coincides with the center.

Inserting into a `Fork` is recursive – it updates the respective child and creates a new `Fork`.

Finally, the `Leaf` quadtree represents one or more bodies:

If the `size` of a `Leaf` is greater than a predefined constant `minimumSize`, inserting an additonal body into that `Leaf` quadtree creates a `Fork` quadtree with empty children, and adds all the bodies into that `Fork` (including the new body). Otherwise, inserting creates another `Leaf` with all the existing bodies and the new one.

Next, we can implement the `Body` data-type:

Here, `xspeed` and `yspeed` represent the velocity of the body, `mass` is its mass, and `x` and `y` are the coordinates of the body.

The most interesting method on the `Body` is `updated` – it takes a quadtree and returns the updated version of the `Body`:

This method is already half-completed for you – you only need to implement its nested method `traverse`, which goes through the quadtree and proceeds casewise:

When are we allowed to approximate a cluster of bodies with a single point? The heuristic that is used is that the size of the cell divided by the distance `dist` between the center of mass and the particle is less than some constant `theta`:

Hint: make sure you use the `distance` to compute distance between points, the `theta` value for the condition, and `addForce` to add force contributions!

Before proceeding, make sure to run tests against your `Quad` and `Body` implementations.

The last data structure that we will implement is the sector matrix. In this data structure, we will use the auxiliary class `Boundaries`, which contains the `minX`, `maxX`, `minY` and `maxY` fields for the boundaries of the scene:

We will also rely on the `ConcBuffer` data structure, mentioned in the lecture:

The `ConcBuffer` class comes with efficient `+=`, `combine` and `foreach` operations, which add elements into the buffer, combine two buffers and traverse the buffer, respectively. The sector matrix additionally has the `toQuad` method, which returns a quadtree that contains all the elements previously added with the `+=` method. Recall from the lectures that this combination of methods make the `ConcBuffer` a combiner.

The `SectorMatrix` is just a square matrix that covers a square region of space specified by the boundaries:

Combiners such as the `SectorMatrix` are used in parallel programming to partition the results into some intermediate form that is more amenable to parallelization. Recall from the lecture that one of the ways to implement a combiner is by using a bucket data structure – we will do exactly that in this part of the exercise! We will add three methods on the `SectorMatrix` that will make it a combiner. We start with the `+=` method:

This method should use the body position, `boundaries` and `sectorPrecision` to determine the sector into which the body should go into, and add the body into the corresponding `ConcBuffer` object.

This method calls `combine` on the pair of `ConcBuffer`s in `this` and `that` matrices to produce the `ConcBuffer` for the resulting matrix.

The nice thing about the sector matrix is that a quadtree can be constructed in parallel for each sector. Those little quadtrees can then be linked together. The `toQuad` method on the `SectorMatrix` does this:

This method is already implemented – you can examine it if you would like to know how it works.

Congratulations, you just implemented your first combiner (or second, if you've attended the live exercise sessions)! Before proceeding, make sure to run those unit tests.

Now that we have all the right data structures ready and polished, implementing Barnes-Hut becomes a piece of cake.

Take a look at the file `Simulator.scala`, which contains the implementation of the Barnes-Hut simulator, and in particular the `step` method. The `step` method represents one step in the simulation:

The pre-existing code in `step` nicely summarizes what this method does.

How does this work? The `aggregate` method divides the input sequence into a number of chunks. For each of the chunks, it uses the `new Boundaries` expression to create the accumulation value, and then folds the values in that chunk calling `updateBoundaries` on each body, in the same way a `foldLeft` operation would. Finally, `aggregate` combines the results of different chunks using a reduction tree and `mergeBoundaries`.

So, we need the `updateBoundaries` method:

Given an existing `boundaries` object and a body, the `updateBoundaries` updates the `minX`, `minY`, `maxX` and `maxY` values so that the boundaries include the body.

Next, the `mergeBoundaries` method creates a new `Boundaries` object, which represents the smallest rectangle that contains both the input boundaries:

Question: Is `mergeBoundaries` associative? Is it commutative? Does it need to be commutative?

Implement these two methods, and test that they work correctly!

Next, we need to build a `Quad` tree from the sequence of bodies. We will first implement the `computeSectorMatrix` method to get the `SectorMatrix`:

Hint: aggregate the `SectorMatrix` from the sequence of bodies, the same way it was used for boundaries. Use the SECTOR_PRECISION constant when creating a new `SectorMatrix`.

Test that these methods work correctly before proceeding!

During the execution of the Barnes-Hut algorithm, some of the bodies tend to move far away from most of the other bodies. There are many ways to deal with such outliers, but to keep things simple, we will eliminate bodies that move too fast and too far away.

We will not go into details of how this works, but if you'd like to know more, you can try to understand how the `eliminateOutliers` method works.

The `updateBodies` method uses the quadtree to map each body from the previous iteration of the algorithm to a new iteration:

Recall that we already implemented the `updated` method which updates a single body.

You can now run it as follows:

To visualize the quadtree, press the Show quad button, and then hit the Start/Pause button.

Play with the parallelism level and the number of bodies, and observe the average speedups in the lower right corner. Then sit back, and enjoy the show!