Due Monday October 8th by 10:15am sharp (right before the class).

By well-nested parentheses we mean those that are correctly nested, and are thus given by the grammar such as the following:

An alternative way to describe such strings

is to say that: 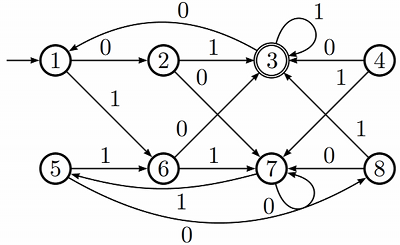 Recall that the general algorithm for minimizing finite automata works in reverse. First, find all pairs of inequivalent states. States X, Y are inequivalent if X is final and Y is not, or (by iteration) if

be any deterministic finite automaton. Assume that

states. Show that if it accepts at least one string of length

or greater then the accepted language is infinite.

Let rtail be a function that returns all the symbols of a string except the last one. For example, rtail(Lexer) = Lexe. rtail is undefined for an empty string. If

is a regular expression, then

applies the function to all the elements. For example,

is the language that can be described by a regular expression

denote the length of the string

be a regular language. Is the language

Consider a language with the following tokens and token classes:

Give a sequence of tokens for the following character sequence, applying the longest match rule:

Note that the input sequence contains no space character. You can separate the tokens in the output sequence by a comma for the purpose of presentation, like so: