Design a DFA which accepts all the binary numbers divisible by 6. For example your automaton should accept the words 0, 110 (6 decimal) and 10010 (18 decimal).

Assume the following extensions to the regular expressions. In each case describe why the modification does not actually change the expressibility.

Design your own operator for regular expressions to make it expressible for describing nested comments.

Integer literals are in three forms in Scala: decimal, hexadecimal and octal. The compiler discriminates different classes from their beginning. Decimal integers are started with a non-zero digit. Hexadecimal numbers begin with 0x or 0X and may contain the digits from 0 through 9 as well as upper or lowercase digits A to F afterwards. If the integer number starts with zero, it is in octal representation so it can contain only digits 0 through 7. There can be an l or L at the end of the literal to show the number is Long.

be the language of strings on

For each of the following languages find the first set. Determine if the language is nullable. 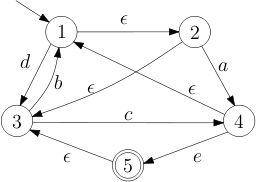 Homomorphism is function from letters to strings such that